Week One: A Full House!

Posted by drkwaku in Uncategorized on June 15, 2009 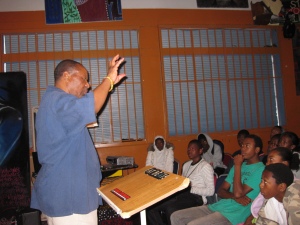 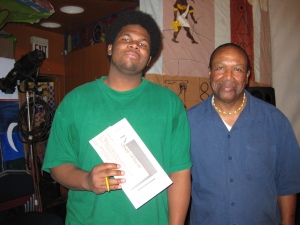 During each semester of Black History 4 Young People, we are pleasantly surprised to meet students who are thirsty for knowledge.  This first week, Xavier Scott asked thoughtful questions, exhibited  prior knowledge and even won the first Black History 4 Young People quiz at the end.  His prize?  A Gift Certificate for two to Simply Wholesome, our sponsoring restaurant which whips up delicious whole foods right there on Slauson and Overhill in Los Angeles. Congratulations, Xavier!

After a series of videos looking back on the class, Dr. Kwaku kicked off the summer session with a riveting power point presentation which travels all corners of the globe and finds the presence and accomplishments of Afrikan people.

From the Afrikan origins of chess, ballet and martial arts, to inaccuracy that Columbus could discover America–(especially when native Americans were already here), Dr. Kwaku covered a wide body of knowledge and set the record straight with evidence.

Ankh:  (dictionary.com) The ankh was the Egyptian hieroglyphic character that read "eternal life", a triliteral sign for the consonants ˁ–n–ḫ. Egyptian gods are often portrayed carrying it by its loop, or bearing one in each hand, arms crossed over their chest. It is also known as the key of life, the key of the Nile, or as crux ansata, Latin for "cross with a handle".

Deities: Usually means "Gods" or sacred beings.  (Dictionary.com)  A deity is a postulated preternatural or supernatural immortal being, who may be thought of as holy, divine, or sacred, held in high regard, and respected by believers.

B.C.E.:  Usually students learn that historical events happen B.C.  (Before Christ) or A.D. (After Death).  In scholarly circles, B.C.E. is used which means "before the common era."

Next Class:
20 June Afrikan Origin of Humanity: We Came Before Columbus
A.) Let's investigate the lives of the original descendants of the first human beings and their genius, creativity and ingenuity to survive. Multimedia
B.) Is there proof that Afrikans were in the Americas before Columbus and helped establish America’s first civilization? Dr. Kwaku will show us!

A bit of housekeeping:
Since the session is full, we may not be able to accommodate students who only want to take one class.  We will hold the seats of the pre-paid student until 10 minutes after class starts, then seat "per class" students based on seating availability. For that reason, please be on time!

We appreciate our parents for bringing the students on time and picking them up on time.  We advise all students to stand just outside our doors when dismissed so your parents can find you. See you next week!